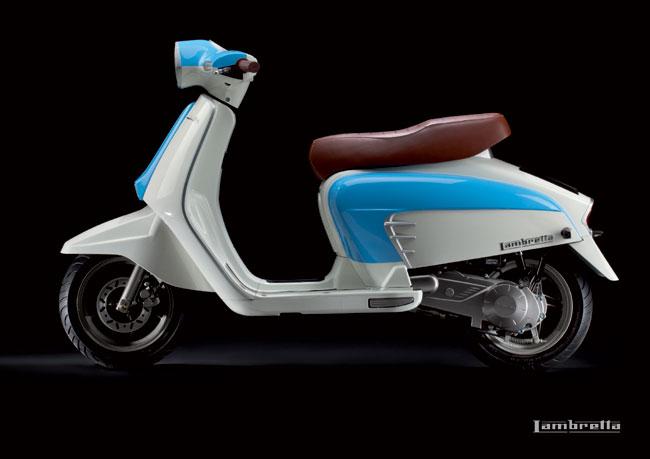 For decades itâ€™s been an iconic symbol that gave worldwide fame to the Italian style: after almost forty years of absence, today Lambretta comes back on the road in the new LN model. Presented last year as a prototype, from now on our city streets will be traveled again by the legendary twoâ€wheeler of the fifties and sixties.

An Italian project, coordinated by a staff of Italian technical experts led by true passion for the famous vehicle. Alessandro Tartarini, son of Leopoldo, founder of Italjet, a company with over fifty years of experience in the motorcycle industry, is the designer of the new Lambretta. Worldwide known for the design of Italjet Dragster, Italjet Formula and the succesfull Velocifero, Alessandro has developed the new Lambretta LN in compliance with the famous ancestor. Itâ€™s a tribute to the great predecessor and a modernâ€day version.

As the original one, the new Lambretta LN a steel bodywork. It is a contemporary dependable scooter, a modernâ€looking design which embodies the soul, spirit and lines of the Lambretta designed in 1947 and conveys the genuine value of design and Italian taste, which is so highly regarded around the world.

The inspiration for the LN model is the history of Lambretta, but Tartarini chose to take suggestions from the Special series, designed by the engineer Sessa during the sixties. Today, as then, the aesthetical and functional details are harmoniously bound in a slender, streamlined, quick off the mark vehicle that never loses the typical qualities of the Italian design.

The ideal road of Lambretta runs around the world: Italian quality, Italian style, Italian concept, but Lambretta is manufactured in Italy as well as in a number of countries around the globe.

The Lambretta LN is now available throughout the world in the 125 cc model (151 cc only in Italy). The LN model comes in five different color combinations to meet the taste of every consumer. The Lambretta is back for all those who want to ride on top of an excellent performing vehicle with a timeless Italian style. Worldwide distributor of Lambretta LN is Lambretta Motolife Italia SpA.