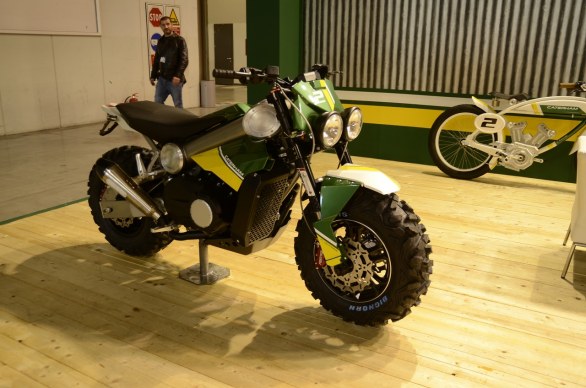 In late summer, the Caterham Group headed by Malaysian tycoon Tony Fernandes – who led the English car manufacturer Caterham Cars , also known for the eponymous Formula 1 team – made ?? Clear their plans with regard to the desire to get too heavily in the field of ‘two wheels’, announcing the entry into the World Moto2 with its own team from 2014 and plans to launch its own then supersport 600 cc in 2015.

To emphasize once more that commitment, the EICMA 2013 is the stand of Caterham Bikes, new motorcycle division of the group that was presented in Milan with three models, for which it was announced the market launch in 2014: the mammoth Brutus 750, the electric retro style E-Bike and Carbon E-Bike, other ‘electrical’ light but by the advanced technology.

It ‘possible that the name’ Brutus 750 ‘did’ prick up their ears’ to some lovers, and after having seen the images will probably be many who remember having seen earlier this bike: it is the latest incarnation of the mighty Brutus 750 EI, already nicknamed ‘the SUV of motion’, the original and powerful two wheels designed by Alessandro Tartarini, son of the founder of Italjet Leopoldo Tartarini.
Just last year we had seen at the EICMA, made IAR (Industries Aeronautical Reggiane) and ready to go into production in Taiwan to be marketed under the brand name Over. Instead things went differently, because in the meantime Tartarini became part of the organization Catheram Bikes to be responsible for design, and its project Brutus 750 will then light with the characteristic green and yellow colors of the British brand.

Just the color appears to be the most new to the Caterham 750 Brutus than the view at the EICMA motorcycle last year, which was higher than the exhaust on the left side and is now low on the right side). The engine is a 750 cc single-cylinder 4-valve liquid-cooled, single-beam frame an oval steel, and are also confirmed the two-speed automatic transmission, the upside down fork 43 mm, the brake system with two discs in front and one behind (all 260 mm and matched to pliers with 4 pistons) and also the possibility of ‘converted’ in snowmobile. Just because of his versatility on different surfaces such as asphalt, gravel, sand and snow, Brutus 750 is also described as the first real ‘multi-terrain vehicle’ two wheels.

The numbers most impressive of this SUV on two wheels are still those related to size: 2,150 mm in length, 800 mm in width, 1130 mm in height, 1460 mm pitch, seat height of 860 mm, 235 kg of weight in order to gear and 26-inch wheels. Caterham still invites to not be impressed by the ‘tonnage’ of this bike, sottolinenandone good ergonomics and ease of use also for bikers not overly experienced.

The Caterham Brutus 750 will arrive on the market next year and will correspond to the Euro 3 standard, but the house has not released official data about torque and power (45 hp for the last year’s model). For sure this bike is a proposal almost certainly original and unique in today motorcycle, and it will be interesting to see what will be the answer you receive on the market with the support of marketing and investment of a reality already established but still growing as Catheram . However it is not the ideal bike for those who want to go unnoticed.
BRUTUS 750 – Technical Specifications
Engine
Type 750cc, Single Cylinder, Liquid-cooled, DOHC, 4 valves
Bore x Stroke 106mm x 85mm
Compression Ratio 10:01
Siemens Fuel Delivery Fuel Injection
Fuel Capacity / 10 liters
Starting System Electric
Transmission Continuous Variable Transmission (CVT)
Final Drive Chain
Emissions Euro 3