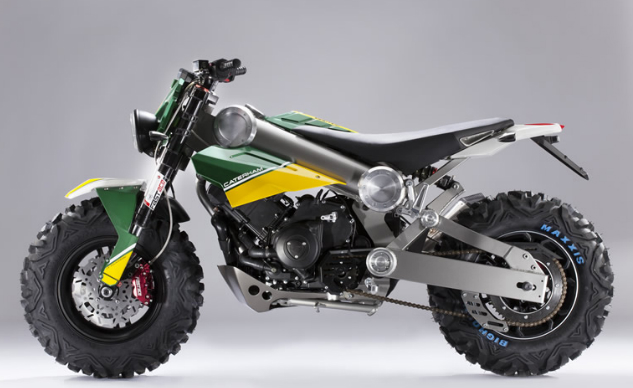 According to Caterham, production will begin as early as Spring 2014, with the Brutus 750 the first to be built, followed by the two electric bikes later in the year. Beginning with the European, North and South American markets, the Groupâ€™s key growth market will be in Asia, reflecting the burgeoning demand for environmentally-friendly and multi-purposed, two-wheeled.

Datoâ€™ Kamarudin Meranun, Co-Chairman of Caterham Group, said: â€œTaking Caterham into the motorcycle business has been a key objective since day one of Caterham Group. We are establishing ourselves in markets where we can bring new thinking, innovative concepts and products that will be game-changers; Caterham Bikes does exactly that. Having launched our Moto2 team recently at the Malaysian Grand Prix, the launch of Caterham Bikes takes us from the track to the road â€“ we have partnered with industry experts and we have long-terms plans for the business that are ambitious but achievable, the perfect mix for success.â€

Brutus 750
Described as the â€œSUV of motorcycles,â€ menacing in stance but surprisingly nimble to ride, the Brutus 750 can operate as a street bike, off-road machine or even a snowmobile (conversion in less than four hours).

Classic E-Bike
Carrying uniquely retro styling for the rider with a penchant for a design harking back to the golden age of British motorcycling, this bike has a range of 40-80km and does not require the rider to have a licence in the EU.

The new division will be spearheaded by Al-Ishsal Ishak as CEO. Ishsal comes to Caterham Bikes from his previous role with AirAsia as Group Head of Ancillary Income. The management team is made complete with Chief Designer Alessandro Tartarini, Chief Engineer Zeno Panarari, both known for their entrepreneurial spirit and product development prowess, along with businessman and ex-MotoGP racer, Andreas Leuthe who will head up the distribution and sales function.